A Season of Mysteries 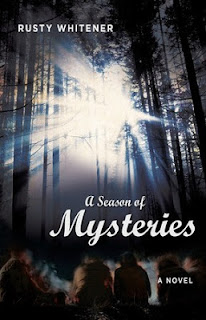 Some may think the ability to recall entire conversations verbatim is a remarkable gift. But to fifty-year-old Dr. Richard Powell, it is a disruptive burden. He is being haunted by words. The words take him back to 1976, to the unforgettable summer when he and his friends of Boy Scout Troup 44 first witness an epic conflict between good and evil.
Faith was relatively new to Zack, Donnie, Skeeter, and the other boys who had played together on the 1971 champion Little League team. That baseball season was forever imprinted on their souls, due in large part to the life-changing actions of a boy named Rafer. But this summer--they would discover the real depth of their souls and the dangerous influences battling for control of their lives.

A follow-up to Whitener's acclaimed debut novel, A Season of Mysteries takes readers back to a time between the innocence of childhood and the uncertainty of teenage years; where girls, studies, and life's bigger issues become a reality. With the same gripping prose that made Whitener an award-winning screenplay writer, A Season of Mysteries explores the seen and unseen spiritual powers at work and the Ultimate Power who controls it all.

Rusty Whitener takes us into the lives of some teenage friends, who happen to become involved with the supernatural realm, through a man named Peachy.  The story revolves around Richard and his friends back in the year 1976, and how they deal with growing up, baseball, boy scouts and the idea of demon possession.     This story was captivating and believable.
I truly enjoyed this novel; it was action packed, easy and quick to read.  Very easy for summer reading.

The Kindle version of A Season of Mysteries will be free June 6 and 7.  Kindle page on Amazon:
Amazon Kindle download