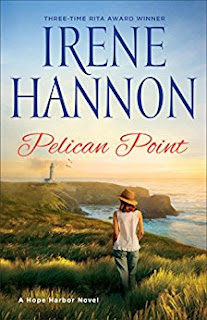 Pelican Point is the fourth novel in the Hope Harbor series.   In this intriguing novel, we are introduced to Army doctor Ben Garrison who has arrived back to Hope Harbor for his grandfather's funeral.

Ben, being sole heir is left everything, including the run-down lighthouse at Pelican Point.  Ben wants to settle his grandfather's affairs and move on to his new practice in Ohio and that means selling an old lighthouse no one wants to buy;  until a developer puts in a bid to buy it and the whole town comes together thanks to Marci, the local newspaper editor to save the landmark.

Can Ben who wants nothing more to settle the estate can't push past the feelings he has for Marci, the strong-willed red headed newspaper editor.  Both Ben and Marci are dealing with past issues that have made them skittish about forming relationships.   Will they be able to move past these issues and yield to their feelings?

The writer has done a great job of bringing you into the small town of Hope Harbor and into the lives of the characters she has created.   I especially appreciated the way all the characters in Hope Harbor revolved around the lighthouse and Charly the taco king.


I like the way she artfully interweaves the characters in this story and creates a subplot.

Although this novel is the fourth in a series, it can stand alone without reading the first three, but once you've read this one you will want to read the rest.

I received this book free from the publisher. I was not required to write a positive review and the opinions I have expressed are my own. I am  disclosing this in accordance with the Federal Trade Commission’s 16 CFR, Part 255 : “Guides Concerning the Use of Endorsements and Testimonials in Advertising.”
Posted by Mary-Ann at 1:42 PM