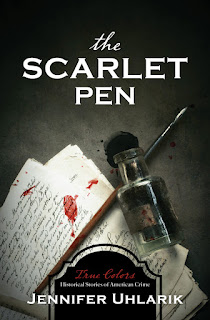 Engaged to a Monster

Enjoy a tale of true but forgotten history of a 19th century serial killer whose silver-tongued ways almost trap a young woman into a nightmarish marriage.

In 1876, Emma Draycott is charmed into a quick engagement with childhood friend Stephen Dee Richards after reconnecting with him at a church event in Mount Pleasant, Ohio. But within the week, Stephen leaves to “make his fame and fortune.” The heartbroken Emma gives him a special pen to write to her, and he does with tales of grand adventures. Secret Service agent Clay Timmons arrives in Mount Pleasant to track purchases made with fake currency. Every trail leads back to Stephen—and therefore, Emma. Can he convince the naive woman she is engaged to a charlatan who is being linked a string of deaths in Nebraska?

My Thoughts:  I have thoroughly enjoyed all the books in this series.  This book takes us to Ohio and the wild west of Nebraska and Iowa, where a young woman is deceived by her fiancee.  Wonderfully written, this book grabs the reader's attention until the very end.  This book is based on true facts.  This is what makes the stories so interesting is the fact that they are based on true crimes.  It is hard to fathom sometimes how these crimes could possibly have been committed.  If you like mystery and true crime books this is a must-read.  A crime of counterfeit and murders will certainly entertain. 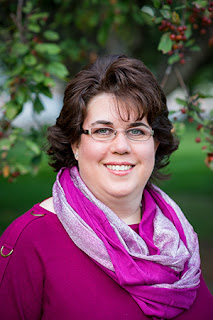 Jennifer Uhlarik discovered the western genre as a preteen, when she swiped the only “horse” book she found on her older brother’s bookshelf. A new love was born. Across the next ten years, she devoured Louis L’Amour westerns and fell in love with the genre. In college at the University of Tampa, she began penning her own story of the Old West. Armed with a BA in writing, she has won five writing competitions and was a finalist in two others. In addition to writing, she has held jobs as a private business owner, a schoolteacher, a marketing director, and her favorite—a full-time homemaker. Jennifer is active in American Christian Fiction Writers and is a lifetime member of the Florida Writers Association. She lives near Tampa, Florida, with her husband, teenage son, and four fur children.

Hello, Readers! For all who might never have read one of my stories or come across me, it’s great to meet you! I’m a wife, a mom, a (young!) grandma, and an author—among many other things. My author tagline is “Where Grit Meets Grace.” If you’re familiar with my writing at all, you’ll know that most of my stories at least touch on a bit of the difficult side of life. Death, abandonment, war, addiction, or who knows what else you might find. The Scarlet Pen is no different.

Given that this novel is the final installment in Barbour’s True Colors series, the story revolves around a true crime from history—in this case, the murders of serial killer Stephen Dee Richards—AKA the Nebraska Fiend. Anytime you’re dealing with someone so depraved as he, you’ll find plenty of “grit” to write about. But that’s only half of my tagline. Remember, it’s “Where Grit Meets Grace.”

While I love a story that delves into difficult topics and, in some cases, pushes the characters right to the edge of what they can handle, I also love a truly redemptive story. When I was asked to write for this series, the ideas that drew me the most were the ones that had something redeeming in the actual history. There were plenty of interesting historical killers I could’ve chosen where I could have manufactured a positive, even happy ending through the fictional characters in the book. In the case of Stephen Dee Richards, there was no manufacturing needed. The “grace” part was already written. The end of Stephen’s story is precisely why I chose to write about him. I hope you’ll find it as though-provoking and compelling as I did. Happy reading!

For Him and My Family, July 30

The Meanderings of a Bookworm, August 4

Through the fire blogs, August 8

For the Love of Literature, August 10

Little Homeschool on the Prairie, August 11

Spoken from the Heart, August 11 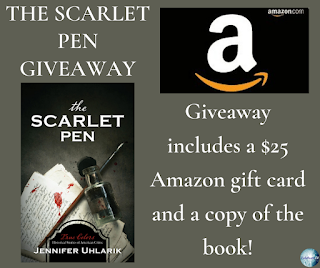 To celebrate her tour, Jennifer is giving away the grand prize package of a $25 Amazon gift card and a copy of The Scarlet Pen!!

Be sure to comment on the blog stops for nine extra entries into the giveaway! Click the link below to enter.