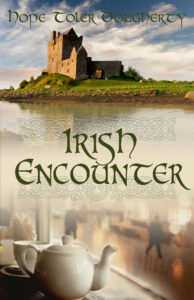 After almost three years of living under a fog of grief, Ellen Shepherd is ready for the next chapter in her life, perhaps an adventure during a visit to Galway. Her idea of excitement consists of exploring Ireland for yarn to feature in her shop back home, but the adventure awaiting her includes an edgy stranger who disrupts her tea time, challenges her belief system, and stirs up feelings she thought she’d buried with her husband.

After years of ignoring God, nursing anger, and stifling his grief, Payne Anderson isn’t ready for the feelings a chance encounter with an enchanting stranger evokes. Though avoiding women and small talk has been his pattern, something about Ellen makes him want to seek her—and God again.

Can Ellen accept a new life different than the one she planned? Can Payne release his guilt and accept the peace he’s longed for? Can they surrender their past pain and embrace healing together or will fear and doubt ruin this second chance at happiness?
My Thoughts:  This is a charming romance story.  It is centered around two people Ellen and Payne who both have been living a life with grief.  God intervenes with a plan of his own and the story begins.  It is amazing how God can use people to further His will.  This is a wonderful story full of love and forgiveness, and second chances.  It's about coming back to God and learning that He loves us no matter what.  The characters are vulnerable, which makes the story seem so real and true to life.  There are twists and turns in the plot which make this a novel that his hard to put down.   So take a little journey to Ireland and wrap yourself in a little romance.  This is a novel you don't want to miss.  I look forward to reading more from Hope Toler Dougherty, she can certainly spin a good story. 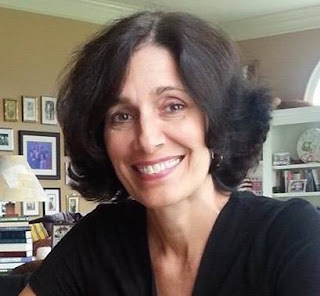 Hope holds a Master’s degree in English and taught at East Carolina University and York Technical College. Forever Music is her fourth novel. Residing in North Carolina, she and her husband enjoy visits with their daughters and twin sons.

Inspiration Behind Irish Encounter
A few years ago, I was staring at the first day of the rest of my life. My oldest daughter was set to graduate high school in less than a month. Two years later, her sister would march right behind her, followed in two years by their twin brothers.
Life as I’d known it for the preceding eighteen years was about to change enormously.
Throughout my tenure as a stay-with-my-children mom, I’d written for publications—sporadically—but I had a portfolio of articles with my byline in print.
That May afternoon, I decided to write something for Guideposts, a magazine filled with inspirational, faith-filled stories. I’d just completed “The Life of Moses” with Bible Study Fellowship, and I envisioned sharing wisdom and insight gleaned from thirty two weeks of study.
I penned What I learned from Moses on the top line of a yellow legal pad. As soon as I wrote this fascinating title, I immediately began daydreaming—about Ireland, not Moses.
In my daydream, a woman in an Irish café scribbled in a journal. A little old man in a tweed vest approached her, introduced himself, and began talking about his late wife.  I saw the wooden buttons on his vest and the Irish cap clutched in his hands.  Suddenly another man, dressed in dusty safari clothes, appeared to the woman’s left, lounging at his table and eavesdropping on their conversation.
This scene interested me infinitely more than the Moses idea. I turned the page to a fresh sheet and wrote everything I saw and heard in that Irish coffee shop.
Irish Encounter began that day. I didn’t know it yet, but God did. I just hurried back every morning to my desk to see what happened next. Before writing, I’d recite Bible verses from the Moses study, like Exodus 3:12 “And God said, ‘I will be with you’” and Exodus 4:12 “Now go; I will help you speak and will teach you what to say.” (NIV)
I’d pray for guidance and help, and then I’d travel to Galway.
God led me onto this writing journey with a lot of prodding and pulling and nudges toward those interesting characters. I’m thankful every day He did, and I hope readers will enjoy the trip to Ireland with Ellen and Payne, too!

For Him and My Family, July 31

Through the Fire Blogs, August 1

Writing from the Heart Land, August 3

Reflections From My Bookshelves, August 5

A Good Book and Cup of Tea, August 10 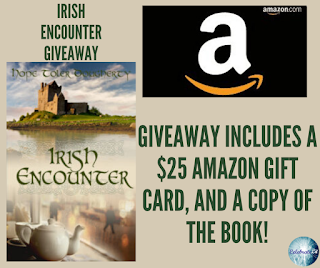 To celebrate her tour Hope is giving away the grand prize package of a $25 Amazon gift card
& a copy of the book!!
Be sure to comment on the blog stops for nine extra entries into the giveaway!
Click Here to Enter!
I received this book free from the publisher. I was not required to write a positive review and the opinions I have expressed are my own. I am  disclosing this in accordance with the Federal Trade Commission’s 16 CFR, Part 255 : “Guides Concerning the Use of Endorsements and Testimonials in Advertising.”
Posted by Mary-Ann at 7:00 AM