The Sinner in Mississippi Celebration Tour 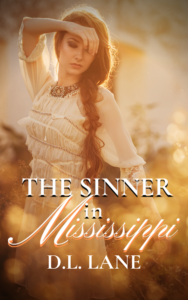 Not expecting me to live, the midwife cleaned me up, wrapped me in an old tea towel, and placed me in a knitting basket beside the wood-burning stove. According to Mama, the storm raged until morning, but I never made one sound. So, hours later, when they peeked in at me, they were surprised to see me sucking my thumb, staring up at them with eyes the color of bluebells.

Mama told me, that’s when she cried.

See, she hadn’t shed a single tear during the harsh pain of giving birth or out of fear of the horrible storm taking the house and her with it, but she sobbed when she saw me. To her, it would have been better for all of us if I’d passed on in the night, carried off on the wings of angels, never to suffer the evils of this world. And sometimes, I wondered if she hadn’t been right.

My Thoughts:  This was an astounding, powerful book.  This is the story of a survivor.  This is a book that readers will not be able to put down until the end. Mississipi Singelton is a girl with spirit and fire.  Even though she comes from a poor abusive background, she is thankful for everything she has.   Then there is Thayer Drayton King,  Tycoon, and a man of integrity.  This is their story which the readers will love.   This is a story of overcoming, a story about not judging people for their circumstances.  How we can love everyone.   This really was a compelling story to read. This won
an overcame so much and gained her faith in God.
💜💜💜💜💜
lick here to get your copy! 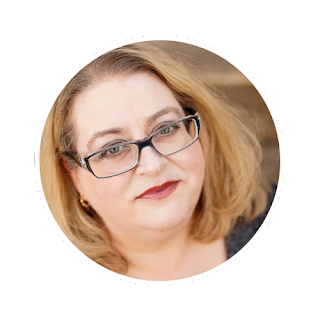 D.L. Lane is a wife, musician, a graduate of Liberty University, and a member of American Christian Fiction Writers. In 2010 she walked away from the day job and started a writing career using a pen name. As far as the world was concerned, she was very successful writing romances, however, success aside, she knew she wasn’t on the right path but stubbornly kept on going for nine years. Although a Christian and raised in a religious home, D.L went her own way, leaving God out of her choices until He said, “Enough.”
Weary and seeking guidance, she finally listened and left the course she was on as an established novelist to take a new path—putting God first in her life where He always should have been.

I love writing, and I love to challenge myself as an author, and so I thought, why not write a fictional historical piece. This was a test for me since there are many things to research when writing during a different era, especially when I wasn’t around at that time. But I prayed about it, grabbed my laptop, and started writing about a poor, uneducated girl who grew up in Louisiana during the Great Depression in a motherless home with a group of reprobate males.
Not unlike the story of Joseph in the book of Genesis, a boy despised by his brothers who plotted against him, later rose from the depths to become one of the most powerful men in Egypt, facing the very men who had been responsible for the atrocities he’d suffered. Joseph had a choice. Let them die or help the ones who never helped him? This story weaves some of that same treachery with truth, teaching not only the heroine but the hero the ultimate meaning of love.

I wanted to give readers a book demonstrating the fact God will never leave us, even if we have left him for a time. That a personal relationship with Christ is our ultimate source of strength, and with His help, we can be pulled out of the depths of great sorrow, rising to heights we never imagined possible.

For the Love of Literature, August 26

For Him and My Family, August 28

Labor Not in Vain, August 30 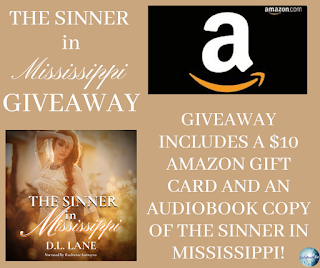 To celebrate her tour, D.L. is giving away the grand prize package of a $10 Amazon eGift Card
and a free Audiobook of The Sinner in Mississippi!!
Be sure to comment on the blog stops for nine extra entries into the giveaway!
Click Here to Enter!
I received this book free from the publisher. I was not required to write a positive review and the opinions I have expressed are my own. I am  disclosing this in accordance with the Federal Trade Commission’s 16 CFR, Part 255 : “Guides Concerning the Use of Endorsements and Testimonials in Advertising.”
Posted by Mary-Ann at 7:00 AM